... was a monthly, then weekly publication serving the good people of northern Wisconsin.  "Neil Kopulis" was one of them, and served himself.

Neil?
The black and the woman are not QUALIFIED.  Are they?

Northern Wisconsin's Viewspaper
‘President Winfrey’ not such a bad idea (really!)
by Neil Kopulis
for The Sounder
January 17, 2008

No, that wasn't Britney Spears, babbling away to herself in the halls of some booby hatch.  It was of course Hillary Clinton -- in the opinion of yours truly, AS unfit to be president of the United States -- who cried her way out of an embarrassing 3rd place finish in the Iowa cornfields, to a dumbfounding prize turn in last week's New Hampshire primary.

What the heck???  That's all it takes?  No plan?  No platform...No clearcut stance on any issue?  Just a wish for it to be so...a healthy (some might say ‘delusional’) sense of entitlement, a show of crocodile tears??  Where do I get the wife signed up?

In fact, I'd have voted for that walrus-looking geezer with the jet black toupee, that governor of New Mexico, before I'd poke a chad for Hillary Clinton.

But I've got nothing against a woman president.  The wife, I think, would make a great one.  Grudgingly, I also concede that I'd vote for Oprah.  She obviously has SOMETHING or other to offer. If she can run a country as well as she can run herself and her empire...and/or sway the Arabs to leave us alone with the same sort of magic hypnotism she seems to hold over most of us...then hey.

It's President Winfrey for me!

It's like that scene in the Will Farrell movie about the race car driver, Ricky Bobby (“Talledega Nights”), when he thought he was on fire?  He's running around the race track in his underpants, thinking he's ablaze, screaming (and I'm paraphrasing), 'Help me, Tom Cruise!  Tom Cruise!  Bring your witchcraft to put out the fire!'.

Exactly.  And he wasn't even ON fire!  This is all I'm saying.

But I don't think I'm alone in suggesting that all of the candidates this year lack a certain 'gravitas'.  They're all little more than empty suits, it seems to me...with the exception, perhaps of Rudy Giuliani...who, as ex-Mayor of New York City, a former crony and supporter of the federally indicted Bernard Kerik, on the very front lines on September 11th, and presently working on his third marriage...has probably got enough drama, back-story and 'gravitas' for all of the candidates put together.

But Giuliani is a turd.

So where does that leave us as we limp into 2008 and beyond?  With a war on two fronts (Iraq and Afghanistan), another one (with Iran) seemingly looming, oil at $100/barrel, gas at upwards of $3/gallon and housing, jobs and currency woes?

All of this, and Britney Spears??

Tokenism is not the answer.  In the desperate ‘bucket list’-like race to install a black or woman president, there's one simple fact that keeps being ignored:  the black and the woman in this race are not QUALIFIED.  Are they?

Hillary's husband being president does not make Hillary qualified...and maybe it's just me, but the word ‘change’ does not really make it as a campaign promise.  Whether it's Hillary because she's a woman, Obama because his skin isn't ‘white’ ... John Edwards, because he wants to end the 'old boy' corporate/lobbyist culture in Washington (which, funnily enough, so did our current unqualified White House resident) ...

‘Change’ as a concept is all well and good.  As a practice, it's essential.  As a WORD...just an empty promise from empty suits.  It's as meaningless as tears from a crocodile. 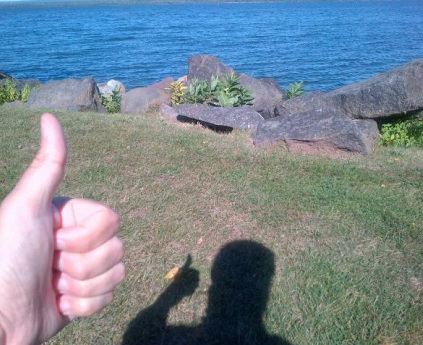 at some published snatches from
UNDERWEAR WOMAN DIGS THE SEA
These are Some Travel Stories!